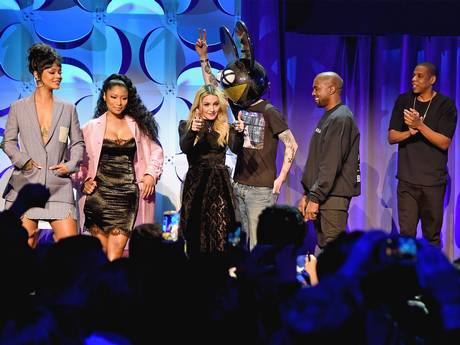 In the wave of Tidal’s launch (hur) the idea that musicians, and artists and maybe even writers, should be paid fairly for the work they produce is again being discussed.

Of course what I mean by discussed is that, actually, everyone really agrees that artists of all types should of course be paid fairly for their work. If music, a book or piece of art gives someone else pleasure then it has inherent value and the person who spent time creating it should obviously be compensated for their effort. The problem seems to be that while most people will nod their head to this idea, it still doesn’t actually happen.

Spotify is great, but with 75% of its users on the unlimited free service and artists paid an average of $0.007 per play, it’s not exactly going to make the average musician rich, let alone support the band tirelessly gigging and releasing albums they’ve funded themselves. The same is true for a lot of other people working the creative industries; very few can support themselves producing art and it’s accepted that a lot of the time you’re going to be working for free. Whether that’s writing or performing for free for experience and to get your name out there, or just because there’s no other option, it seems to come with the territory.

It makes it hard, of course, for anyone who just can’t afford to live that way to build a creative career for themselves. If you can’t afford to take a pay cut and work part time so you can spend the rest of your week writing or making music or art, then your only choice is to create as a hobby. Which is fine, maybe that’s all it needs to be, but it seems like we must be missing out on some amazing stuff simply because the person who could be making it is too knackered after a day in the office, or shop, or factory, to come home and work on their project. If you really think that really talent will always rise to the top, then you’re seriously deluded. Life really isn’t that fair, and whatever talent someone has it’s utterly pointless if they never have the opportunity to practice it.

If you really love what you do, though, you will practice it, you’ll have to. And of course it isn’t all about being paid, if anything the real reward is recognition; being noticed for your talent is much better than any fee you could earn. Our society, in this country anyway, sees value in the shape of pound signs though, so a large cheque usually accompanies any serious recognition. Which is nice, because being able to pay your bills makes life a lot more comfortable.

Perhaps Tidal will make a difference and musicians, songwriters and producers will be paid what they deserve. The line up of very famous, very rich, musicians who launched the service have led some, including Lily Allen, to suggest that it’s just another way for rich people to get even more richer (yes, that’s right, more richer). In the end, only people with power can affect change, and money equals power so whatever the politics are, no one is going to give a shit if the bloke who gigs at your local once a month starts his own streaming service with exclusive content. Lots and lots of people, apparently, like Rihanna and that sort of thing, so surely their involvement is the best way to start a business like this and give it any chance of success. Yeah, the launch ceremony was sickeningly self-congratulatory and self-indulgent, but that’s the world they live in after all. An actual step to insuring people get the money they should for the work they do is a positive move, and what’s more Kanye West managed to refrain from suggesting Beyonce should get all the recognition, so that’s another win.

One thought on “Money for nothing”